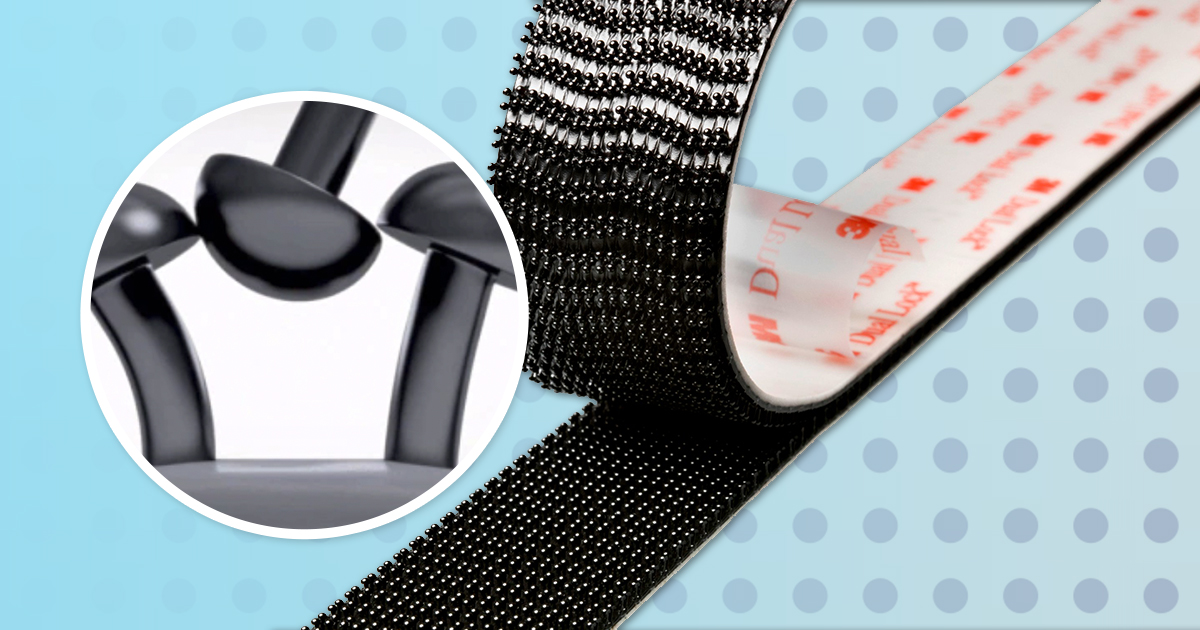 Knowing the construction and performance characteristics of flexible reclosable fastener types, makes the right choice for your application a lot easier.

Best known and most widely used is the hook and loop fastener, sometimes referred to as hook-and-pile fasteners, touch fasteners, or by a genericized version of its trademarked title, primarily due to the market prominence of the VELCRO® brand name. Inspired by the burrs of the burdock plant, the original hook and loop fastener was conceived in 1941 by Swiss engineer George de Mestral. He arrived at the product’s name by combining two French words, velour (velvet) and crochet (hook).

Hook and loop fasteners typically consist of two components: two lineal fabric strips or converted round "dots" or squares, which are attached to the opposing surfaces to be fastened. One component features a surface made up of tiny hooks; the other surface features the loops.

Pressed together, the hooks catch in the loops and the two pieces remain fastened until they are physically pulled apart. When separated, by pulling or peeling them apart, the strips make a distinctive “ripping” sound. In certain instances, this loud noise can prove to be a liability, such as on military attire. Where unfastening can attract unwanted attention in a battlefield environment. To address this situational shortcoming, “quieter” versions have been developed that are less audible but maintain closure effectiveness and strength.

Hook and loop fasteners are used across a complete range of applications and industries, such as healthcare, the previously mentioned military, land vehicles, aircraft, and even spacecraft. Safe and virtually maintenance free, its effectiveness of closure remains constant even after many fastenings and unfastenings.

Mushroom-shaped stems are found on heavy-duty flexible reclosable fastener variants such as 3M™ Dual Lock™ Fasteners. These industrial fasteners work in a manner like the hook and loop products but offer up to five times the holding strength and are also light in weight.

3M™ Dual Lock™ Resclosable Fasteners feature mushroom-shaped stems on each face of the fastener, providing an audible snap when the two faces mate. Strong, interlocking mushroom-shaped heads move past each other to close with a snap, then pull apart easily when you need to reopen.

Temperature, moisture, and UV resistant, these strips make excellent quick-release access panel fasteners. In addition, die-cut pieces are ideal for attaching accessories, like a toll transponder, to the windshield of a vehicle. The quick-release fastener can also be used for changeable signage and display units as well as to gain quick access to areas that require periodic maintenance.

VELCRO® and other marks are registered trademarks of Velcro IP Holdings LLC. Used with permission.